A Blockchain Developer's Journey at Tanla

A Blockchain Developer's Journey at Tanla 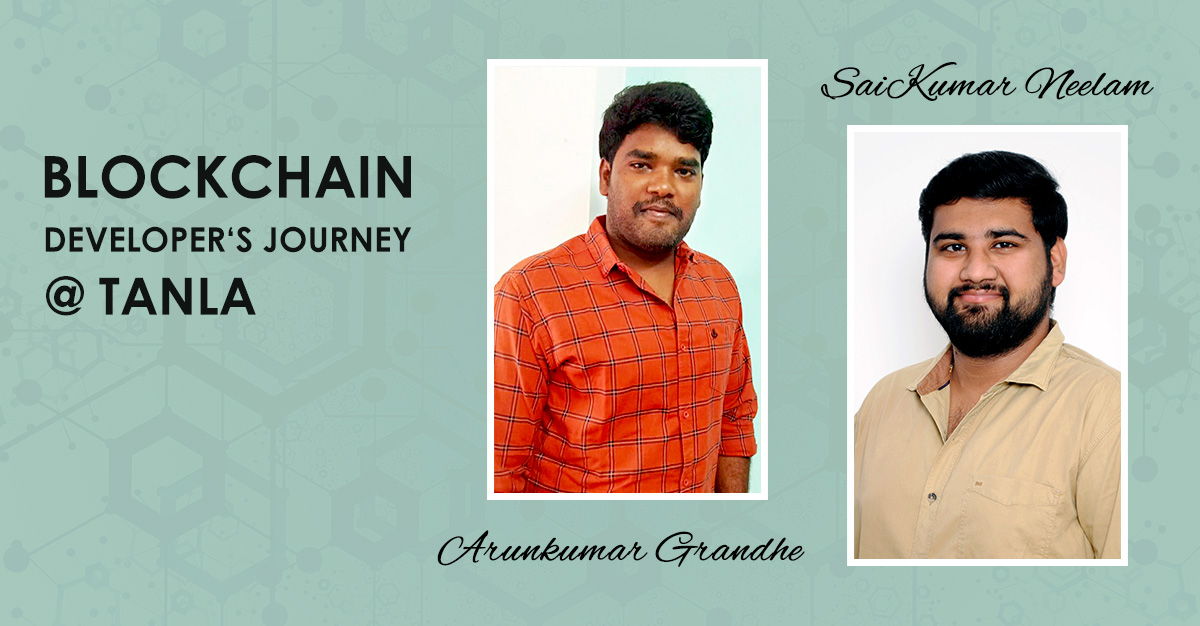 Being the first in any industry is challenging, especially when it comes to a technology that is revolutionary and complicated. From the elusive new cryptocurrency to becoming millionaires by selling Non-Fungible Tokens (NFTs), Blockchain has taken over the world. We spoke to a few developers who started their journey long before Blockchain was cool. Saikumar Neelam and Arunkumar Grandhe both joined Tanla as freshers and started their journey here, building Trubloq – one of the world’s largest use cases for Blockchain.

The blockchain journey at Tanla started when the Telecom Regulatory Authority of India (TRAI) mandated a new regulation for telecom operators. At that time, Tanla was the technical partner for some of the major Telcos at the back end. The goal was clear – the team had to set up a blockchain and it had to be completed ASAP. TRAI had already announced the regulations for Unsolicited Commercial Communication (UCC) and Tanla had to ensure support to the Telcos. Saikumar & Arun along with the others in the team took on the responsibility to deliver a product that safeguarded customer interest by Scrubbing at Terminating Access Provider (TAP) to ensure no UCC is delivered. They knew they had to deliver the world’s first commercial communication stack built on Blockchain. The team researched multiple blockchain frameworks and found the solution in Hyperledger Fabric, which is a blockchain framework open-source technology presented by Linux Foundation. The management ensured that there were no limits for the usage of any resources. The goal was to own a node and it would belong to the Telco. Once the node was deployed for one Telco, it had to be replicated for the other Telcos. The Trubloq team of Golang and Python developers started work on developing multiple applications which would be interacting with Blockchain. The idea was to create the best application with the best throughput and the best utilization of resources.

Saikumar says “We were very new to this technology; we had to ensure that these nodes could communicate with other nodes. Being freshers, we completely depended on documentation. The Hyperledger fabric has community support and good documentation; still, it was challenging. At that point we counted on our team leads to share resources and drive the project. Blockchain involves multiple participants with each node. The first prototype we built crashed because of an outdated framework. So, this time we started building the blockchain from scratch. We upgraded the technology from one version to another version. Blockchain is a one-time setup which means business logic can be set up only after the blockchain is deployed. An example use case is: Telco subscribers’ information should be updated by that particular telco only; it should not get modified by any of other blockchain organizations. We faced quite a few challenges but were able to deliver. All this took us around 3 months. But when we completed the first node, many organizations reached out to understand how they too could implement it too. With our help, they were able to do some research and in turn help others as well.”

Both Arun & Saikumar had a similar journey at Tanla. They were hired as freshers and put under the fresher’s training for 3 months. After that, they were moved to Python core programming roles. After this initial training, they were assigned to the Trubloq project basis performance during training and interviews for project assignment.

“The team leaders encouraged us by sharing resources to explore things like big chain DB, Tendermint, etc. Hyperledger has good community support and is an open-source technology, so the team decided to go ahead with it. Once the tech was in place and we knew the blockchain had to be built from scratch, we went ahead with full swing   There was complete support for our team internally. In terms of resources, training, etc. there was nothing else we could have asked for,” says Arun. "We had some interesting and fun workdays that were long but resulted in the successful fruition of this project. Then came the recognition. The best part of working in this company has been the recognition and reward for performance. If you are good, you receive full support to succeed and be appreciated. Tanla has helped us grow in terms of knowledge, skillset as well as giving a great direction to our careers. Today some call Tanla as blockchain giants, for us this has all been possible because Tanla believed we could,” said Arun & Saikumar.

Day in the life of a Blockchain developer

Both Saikumar & Arun work on Trubloq & the UAE blockchain deployment as part of their daily work.

Arun talks about his everyday work at Tanla, “I am currently working on two projects – one is the Trubloq India and second is a UAE blockchain deployment which is different from Trubloq. It is a completely new version (V2.X) of blockchain with a complete architecture change. We have set up the prototype to make sure all functionalities are working fine. In Trubloq India, we maintain blockchain networks, nodes, and applications for major telcos while the Dubai project is for two telcos. My responsibility is to set up the blockchain and maintain it in the backend, apply the business logic for the blockchain, managing small contracts using Python language and Golang. We are also certified Hyperledger fabric administrators. We started with Python initially, and then switched to Golang. As for blockchain, whenever any transactions take place in the Distributed Ledger Technology (DLT), we can capture it through intelligent applications.”

Giving back to the Developer Community

“When we started, there were very few communities for Blockchain. More communities and platforms are available now, and we try to contribute to the communities to help others. We completed our certification in blockchain in February 2020. With very few people working on this technology at that time, my number is around 180 in the world to complete this certification,” says Saikumar. So, we are helping others like our LinkedIn connections/ other partners to clear their exams, and this is our way of giving back to this community.

It is wonderful to see young people becoming interested in new developing technology, but it's critical that they receive the proper training and mentoring to thrive. The team of young developers at Tanla have been well recognized not only within Tanla but also in the ecosystem for the massive project they undertook and how they are constantly evolving the use cases for Blockchain.

Want to join our growing team? Visit our Careers Page